Starting with the New year, I decided to built the Baldwin-Westinghouse gas turbine in 1/29 - a project that has slept over several years in my imagination. I already had acquired an Aristo-Craft FA/FB-set that provided four trucks and two pieces for the car-body.
After cutting off the ALCO-nose I started to assemble the turbine's nose which is built up by several flat, angled surfaces. 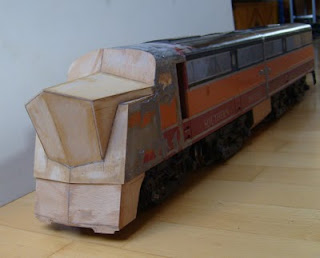 Also, the window area had to be reshaped; the pilot was shaped to rather a rectangular design.
After further cutting & fitting the bodies of both units of the set were merged.

To avoid problems with sharp curves I connected each pair of trucks with an internal span-bolster - the prototype had limited side play for outer and inner trucks.
The whole unit is about 81cm (32") long.
Posted by aerotrain at 1/23/2011 No comments: